Lil Kim Plastic Surgery Before and After Pictures

Lil Kim has made people astonished by her plastic surgery. The American rapper has changed her appearance much, triggering the pros and cons. With her face and body changes, Lil Kim made people to ask what kind of plastic surgery procedure she had. Lil Kim is 40 years-old now, and public noticed that she has had appeared with different facial looks several times. It’s not kind of subtle change, but major changes that make people wonder what was make it? Did Lil Kim have plastic surgery?

Lil Kim is reported to have procedures such as breast augmentation (breast implants), Botox, liposuction, browlift and nose job (rhinoplasty). Other rumor even said that Lil Kim also has butt implant done. Implant also was believed on her cheek while facial filler injections were on her other facial area such as lips and forehead. 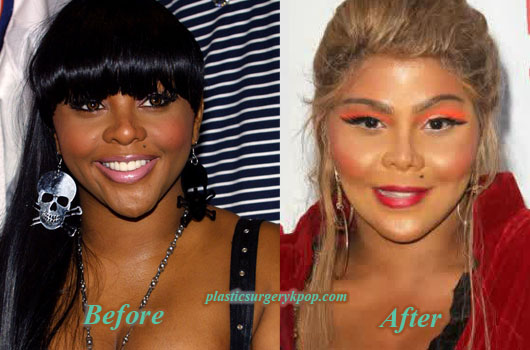 Lil kim actually seemed to deny her plastic surgery matters, but public couldn’t believe her that easy. As a celebrity, Lil Kim plastic surgery has attracted people attention, moreover she had her face and body much changed. Many people considered Lil Kim’s case as an example of bad celebrity plastic surgery.

From her before and after photos, Lil Kim seemed a bit too far playing with plastic surgery. She now appears as if she is a different person and almost unrecognizable.

Lil Kim actually had rather big breasts, but apparently she wanted something bigger. To make it happen, Lil Kim then has breast augmentation done. Breast implants has helped Kim to increase her breasts size. We could clearly see the result of it from Lil Kim before and after pictures. The surgeon’s work seemed make her happy.

Nose job is also one of prominent plastic surgery procedures done by Lil Kim. The surgeon had reshaped her nose especially on its nostril. She used to have a wider nostril shape, while today it becomes smaller and upraised. It’s easy to see her pre and post nose job difference.