Amanda Lepore is an American model and one of the famous transgender public figure in the world. She changed her sex when she was just 19. She was born as Armand. As she changed her sex, it was followed by some plastic surgery operations so that she is completely transformed into a woman. She had to undergo several surgical procedures that include three boob jobs and a buttock implant. She was even asked to break her bottom rib to have a small waist line.

The other plastic surgery procedures that Amanda Lepore has undergone includes a lip injection, nose job, use of filler, Botox, an operation to lower her hairline and another one to life her forehead. 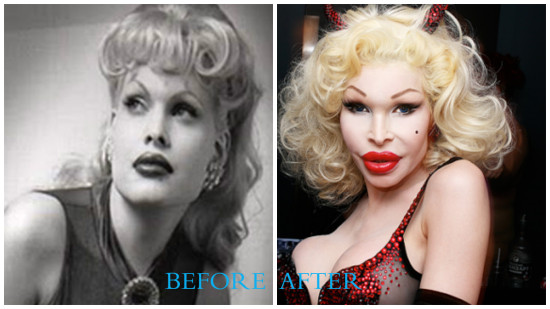 Amanda Lepore has shown the feature of a girl ever since she was in her teenage. She always dreamed of being a girl ever since she was young. And this must be the prime reason she has decided to undergo the surgery to complete the transformation. There is no doubt that what she was undergone was a complicated procedure. But all that has been paid off by big time as she now has a figure that measures 38-22-38. She used lip injection to make her lips look fuller and then used Botox to remove all the wrinkles and the boyish looks. She had a rhinoplasty so that she can chang the shape of her nose to a feminine one rather than the only that look boyish. She also underwent complex procedures that lifter her forehead and another one that lowered her hair line to remove the remaining boyish signs in her body. Or if said in another way, Amanda Lepore has to remodel herself as she changed sex from boy to girl.

Drawing inspiration from Marilyn Monroe, Jean Harlow, and Jessica Rabbit, Amanda Lepore makes efforts to resemble them when she make her public appearances. In fact, her face resembles Marilyn Monroe in many ways.

Every time you look at Amanda Lepore, it is clear that she has undergone several plastic surgeries. And people often criticize celebrities who shows very small sign of receiving a surgical procedure. But for Amanda Lepore, you cannot call her as one of the people whose figure was destroyed after plastic surgery. She has undergone a complex process of changing her sex. She was left with no choice but to undergo the knife so that her transformation from a boy to girl is complete

Next post: Axl Rose plastic surgery Before and After